“Participating in the transformation of the world:” Roots of Success at Stafford Creek Corrections Center

“Education either functions as an instrument which is used to facilitate integration of the younger generation into the logic of the present system and bring about conformity or it becomes the practice of freedom, the means by which men and women deal critically and creatively with reality and discover how to participate in the transformation of their world.” –Paulo Freire, Pedagogy of the Oppressed 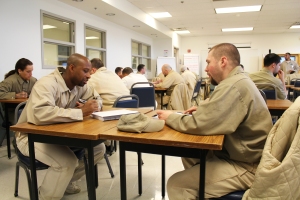 On Wednesday, May 7, I had the privilege of sitting in on my first Roots of Success class and, later, attending the previous cohort’s graduation ceremony. The class I visited is held at Stafford Creek Corrections Center (SCCC) in Aberdeen and team-taught by inmate instructors. It was the second class in Roots of Success’s curriculum, titled “Fundamentals of Environmental Literacy”. I was moved and impressed by how the curriculum’s structure engages students in thinking critically about challenging technical concepts, and by the learning environment instructors and students have created. 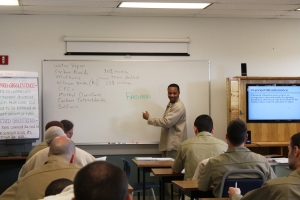 We sat in the back of the classroom, behind twenty-seven students in khaki and beige. At the front of the room were flipcharts, a table, a podium, and three instructors: Grady Mitchell, Cyril Walrond, and David DuHaime. They took turns teaching for about an hour each, separating sections with short bathroom breaks. Now team-teaching Roots for the fourth time, the instructors are excellent at what they do. Their styles are unique, complementing each other well, and they worked together seamlessly. Mitchell’s presence is commanding and dynamic, DuHaime’s careful and personal, and Walrond’s heartfelt and encouraging. All of them joked with the room, putting us at ease, while gently challenging every student to contribute to discussion. Because they are inmates themselves, instructors are able to use examples relevant to students, creating an environment which promotes collaboration and camaraderie. While teaching the concept of bioaccumulation, for example, Instructor Mitchell described the formaldehyde added to prison sheets to keep them from sticking together. “Shake an unwashed new sheet and you’ll see the powder that comes off! I sleep with a towel on top of the pillow now.”

Instructors posed lots of questions to the class, who had good, interesting and insightful answers. They learned about waste and consumption cycles, how small amounts of toxins accumulate in our bodies over time (bioaccumulation), climate change, environmental justice, and more. Students’ diverse backgrounds and life experiences made for very interesting and enriching discussions. 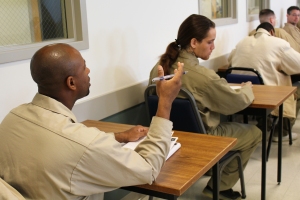 They appeared wholly absorbed in a discussion of climate change, including concepts of “climate injustice” and environmental injustice. Instructors asked the class how global warming might impact health, and students came up with several examples of ways poor people might be affected: being unable to afford air conditioning in the summer or heat in the winter; keeping doors and windows shut in the summer because of safety concerns in high-crime areas; being unable to afford to go to the doctor when sick; being unable to afford insurance coverage for their homes in case of climate-related disasters. One student pointed out that you could say it was the other way around, and in fact social and economic injustice are exacerbated by climate change. In a discussion of planned vs. perceived obsolescence, someone shared the powerful insight that not only products, but people– including entire neighborhoods or communities–could be perceived obsolete.

We watched a compelling video about Chester, PA’s struggle to fight polluting industries’ presence in their town. Instructor Walrond asked the class why someone in the video said that problems wouldn’t be solved if people in Chester waited for someone else to handle them. Students came up with various answers, including that solutions to problems had to come from communities themselves, or at least have community buy-in; and that citizen science, or developing community-generated data, is important for communities to have facts to bring to decision-making tables where they possess no recognized seat. The instructors compared the class itself to community organizing within SCCC, likening knowledge of SCCC from the inmates’ perspectives to the perspectives of community members in the video: while they weren’t professionals or recognized experts, they still had valuable knowledge of what was going on. 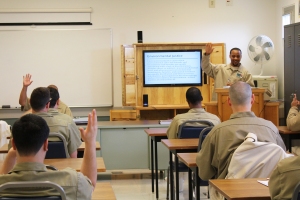 The instructors asked for examples of environmental injustice beyond prison, and students discussed places they lived before incarceration. One student’s neighborhood had foundries which blew up twice. Another lived in Georgetown in Seattle, which is both an industrial and residential zone; he remembered the tremendous exhaust from trucks going by and putting all kinds of particulates into the air. Another person pointed out how sometimes in poor neighborhoods meth labs are not properly cleaned up, and this reminded another student of the ASARCO copper smelter in Tacoma, which left tremendous deposits of arsenic and lead in the soil. In Olympia and Lacey, a student described the smell from a dump on one side of the freeway and a mushroom farm on the other. One person used to test a company’s soil for contaminants, noticing that later the company raised what levels were considered allowable. Finally, someone pointed out that SCCC itself was built on a previous landfill!

The instructors balanced playing up their individual strengths while maintaining a cohesive collective tone with remarkable nuance and flexibility, both among themselves as a team and within the class as a whole. The three hours of class flew by.

Towards the end of class, Superintendent Pat Glebe and Deputy Director of Prisons Scott Frakes stopped to visit and connect with the class. The instructors made a point of telling students that if they had ideas for what could be done to make SCCC mores sustainable, they should write them down because the superintendent comes at the end of every course to hear suggestions and answer questions. They pointed out changes already made at SCCC in response to Roots of Success students’ suggestions. I was moved by the dedication and camaraderie of the inmates participating in Roots, as well as staff’s commitment to supporting the program.

Later that day I was able to attend the most recent cohort’s graduation ceremony, held in a sunny room bordered by lockers. Windows muted periodic loudspeaker announcements outside. At one end of the room a table sat next to the class’s podium, hand-crafted and finished from discarded pallet board. Instructors sat against the wall on one side of the room, administrators on the other, and graduates were seated in the middle. The first speaker, Jenson Hankins, was a graduate from Stafford’s first class. Hankins joked that Roots of Success could just as easily be called “Roots of Challenges” because it helps students understand the problems they have and will face, including those of re-entry. He recalled a video from his graduation ceremony in which Nalini Nadkarni (former Evergreen professor and SPP co-founder) described sustainability education as a ribbon connecting prisoners with the outside world, and said that in his experience, “no matter how isolated I feel from the outside world, environmental literacy lets me know I’m part of the larger environment.”

Several speakers congratulated the instructors on the class and program’s success, calling attention to their remarkable dedication to improving the class (for example, between classes, the instructors meet regularly to brainstorm improvements, adapt materials to improve their accessibility, and review and comment in each student’s workbook). When the instructors spoke, they thanked the students for making the class successful by showing such respect for them, each other, and the material. Mr. Grady described their work together as “elevated,” raising the quality of the class and showing respect not just for each other, but for future students. Mr. Walrond emphasized interdependence of all inmates, calling for them to challenge each other to succeed: “What I allow you to do, I allow myself to do. One thing I will not allow myself to do is fail… We need to depend on each other. Lean on each other. Ask ourselves, ‘what am I doing for the guys who are coming behind me?’”