Recent Roots of Success graduate Aaron Serrano is already applying what he learned in the course at his new job in the sustainable agriculture industry. Aaron made the most of his time at the Cook County DOC Sheriff’s Boot Camp by participating in a farming program at the boot camp’s three-quarter-acre farm, which is run by the Chicago Botanic Garden; and then joining the Botanic Garden’s transitional job crew after he was released. From there, Aaron entered Chicago Botanic Garden’s nine-month Windy City Harvest program — an in-depth training in sustainable horticulture and urban agriculture. Participants in the program receive six months of hands-on instruction in greenhouse and outdoor growing practices, followed by a three-month paid internship. Roots of Success is offered as part of the training to help participants develop their understanding of environmental issues, the green economy, and social justice. 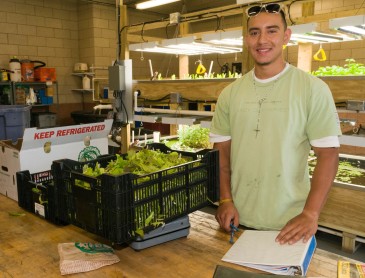 Soon after graduating from Windy City Harvest and receiving his Roots of Success certificate, Aaron was hired by FarmedHere, LLC — a commercial vertical farm in Mid-West Chicago that grows salad greens, culinary herbs and Tilapia fish. Aaron found Roots of Success to be fascinating, educational, and entertaining — it give him “a feeling of accomplishment,” while preparing him to apply for, get, and perform the job he has now. In this photo, you can see Aaron working in front of the aquaponic system that FarmedHere uses to grow its ‘Chicago Sweet Basil’ and ‘Windy City Arugula’ year round, organically, and with 97% less water than conventional farming

Windy City Harvest is an adult education program offered by the Chicago Botanic Garden that focuses on training local residents for jobs in sustainable urban agriculture and horticulture. Their organization has three primary programs: an agriculture program inside the Cook County Boot Camp that instructs inmates in basic gardening and composting, a transitional jobs program that works with ex-offenders in horticultural and agricultural job training, and a nine-month certificate program that provides a diverse group of adults with a comprehensive sustainable urban agriculture and horticulture education through a partnership with Chicago City College. For additional information about the Windy City Harvest program please contact Angela Mason, director of community gardening, at windycityharvest@chicagobotanic.org , or by calling (847) 835-6970.